Purchased in early 2014 from one of my game nut colleagues (you know who you are!)

The Treamcast is an unauthorized third-party developed Dreamcast modification from China or Hong Kong that gained notability for its portability. Although there are several versions, all consist of modified internals from an original Dreamcast system, rehoused in a replacement case with a fold-down display resembling the screen produced for the PSone. As it uses original Sega parts, it is not strictly a clone console.

Because of its modified firmware, the Treamcast can play all international games. It is also able to read CD-Rs and play MP3s and Video CDs with special software. Also, despite its origins in Asia, the Treamcast houses an American power supply. It comes with unique controllers (which resemble six button Sega Genesis controllers, lacking an analogue stick) but is also compatible with original Dreamcast controllers and other 3rd party controllers. 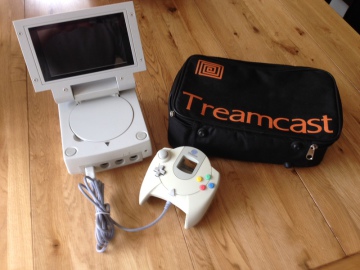